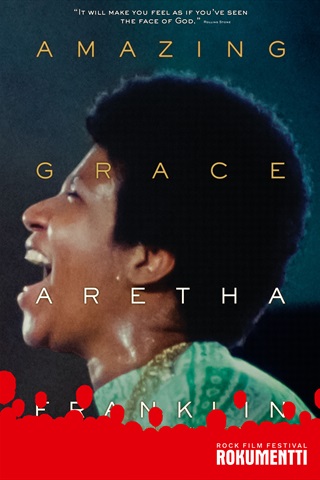 The queen of soul reigns also in church

The late and great Aretha Franklin is best known as a soul singer and hits like I Say a Little Prayer, Respect, A Natural Woman and Think are a part of pop music canon. However, gospel was Aretha's first musical love, and Amazing Grace, the album recorded in 1972 in Los Angeles New Temple Missionary Baptist Church with Southern California Community Choir, was a huge success. The album won a Grammy and remains to this day the best selling Aretha Franklin album of all time. This long-awaited concert film shows us how the masterpiece saw the light of day after Aretha literally returned to the church.

The materials for this film are completely from 1972: it combines footage from the rehearsals and the two nights of recording. Despite all the fuzz caused by the recording and film crews, Aretha has complete reign over the situation. She remains calm and isn't startled even by the outspoken praise from the reverend James Cleveland or her father C.L. Franklin. The praise is more than justified. The album is classic for a reason, but as an experience Amazing Grace is even more compelling on film.