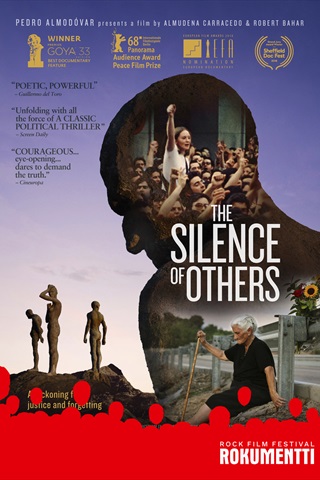 Rokumentti: The Silence of Others (2019)

The Silence of Others

Forgetting does not mean forgiving

Filmed over a period of six years, The Silence of Others from Emmy-winning directors follows the struggle of the victims of General Franco’s dictatorship, and their search for justice. In an effort to finally get their voices heard, the survivors come together to organize a lawsuit against the human rights violators. The documentary reveals the tragic and horrifying stories of the victims. In addition, the film takes a look at how Spain is still divided and affected by the shadow of Franco’s reign. Some want to fight for justice, and others feel it is best to forget the horrendous events and move on.

Bahar and Carracedo’s documentary will not leave anyone unmoved. The victims’ haunting stories serve as a reminder of what happens when fascism takes over. The Silence of Others depicts the determined individuals and their fight to bring the horrors of history into daylight, and to bring the guilty to justice