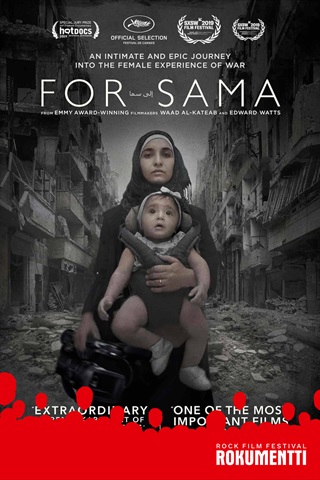 The voice of a mother from a war-torn city

The award-winning documentary For Sama is directed by Waad al-Kateab and it tells her own story from war-torn Aleppo. Waad al-Kateab began filming in 2012 to post the Syrian student demonstrations on YouTube. Soon the demonstrations turned into a chaotic war zone, but al-Kateab continued. Over the years she filmed footage of bombings, corpses, weddings, births and raising children in the middle of a war. Life and hope still glimmer in the ruins of a burning city.

For Sama is an intimate and epic story of a mother's experiences during the war. It is a love letter to a daughter and an explanation for why a mother would stay in the wrecked Aleppo defending her freedom and raising her family.