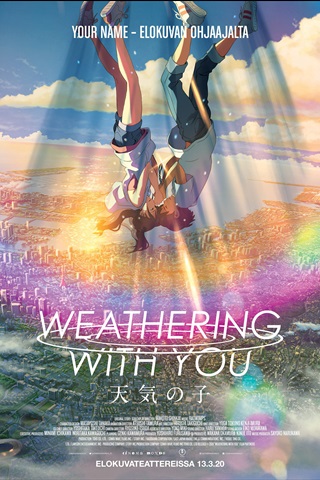 "Soaked with climate-altering passion, Makoto Shinkai’s new animated spectacle “Weathering With You” once again pits two young lovers against forces beyond their control, treading similar waters as his 2016 global hit “Your Name,” for a thrilling extravaganza of scintillating imagery, uproarious music, and gravity-defying stunts with spiritual panache.

Torrential rain drowns Tokyo like it hasn’t in recent memory, and with every enormous drop that reaches the ground, the city’s dwellers long a little harder for the sunshine of summer. Such inclement conditions welcome 15-year-old Hodaka, a small-town dreamer who’s run away from home to the chaotic metropolis.

Necessity propels him to take a live-in job transcribing for a scruffy father figure, Keisuke, whose occupation is to write engaging fake news. But his luck changes when he, gun in hand, attempts to defend Hina, a “sunshine girl” with the power to momentarily stop the downpour." - THE WRAP/ Carlos Aguilar