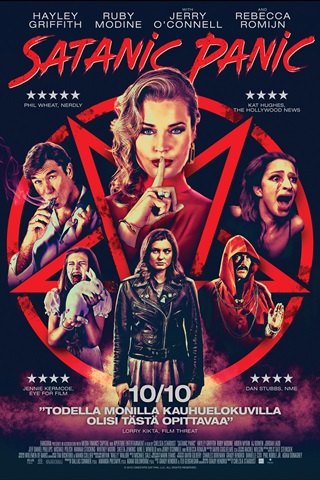 "Satanic Panic is the epitome of a bad day at a thankless job. When a pizza delivery driver, Sam (Hayley Griffith), drops off pies at a mansion in the uppity Mill Basin neighborhood, she unwittingly interrupts a satanic ritual in progress. --- It moves at a sharp pace, with a killer aesthetic and soundtrack to keep it bouncing from scene to scene. Director Chelsea Stardust gives us something that is bright, contrasty, and full of energy."

"Following the likes of 2016's Raw (directed by Julia Ducournau) and 2017's Revenge (directed by Coralie Fargeat), first time director Chelsea Stardust here shows that much of the most exciting, subversive and gruesome work in the horror field is being done by female directors right now."

"Satanic Panic walks a fine line between terror and tears (of laughter), blending buckets of gore with bucketloads of laughs in equal measure. The film also has a real sardonic wit and the kind of snark and black humour that you’d find in the scripts of Daniel Waters – films like Heathers and Vampire Academy in particular – making this something of a must-see for fans of that kind of dark teen comedy. --- You could consider Chelsea Stardust's film something of a love-child of Scream and the self-referential era of films that followed it."

"A fast-paced, cheerily vulgar piece of work that's not afraid to break a few cinematic taboos, Satanic Panic is one of those films that's a lot smarter underneath than it looks on the surface."