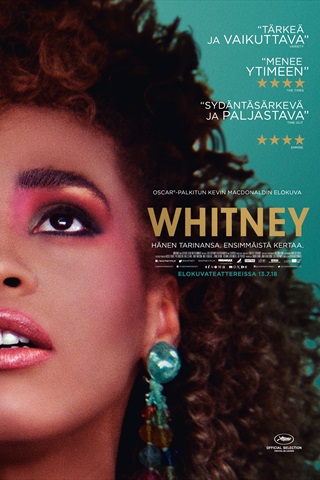 This documentary tells the story of Whitney Houston, one of the most successful artist of all time. Known for her incomparable singing voice, Houston is one of the most recognised and talented pop singers in the past century. Kevin Macdonald’s film takes an in-depth look at Houston’s life and career from local gospel choir to stadiums, and doesn’t shy away from the singer’s controversial and messy private life which eventually was the undoing of the mega star.

From the outside, Whitney is the delightfully sweet and lovable pop princess with an incredibly beautiful voice. Behind the pastel curtain, however, there is anxiety and severe drug addiction. The sleazy tabloids that loved to feast on her every move made the situation even worse. The fading talent, unhealthy relationships and drug abuse led to Whitney’s overdose and death at age of only 48.

Whitney is a touching portrait of the great singer for whom the immensity of her talent was too much to bear.