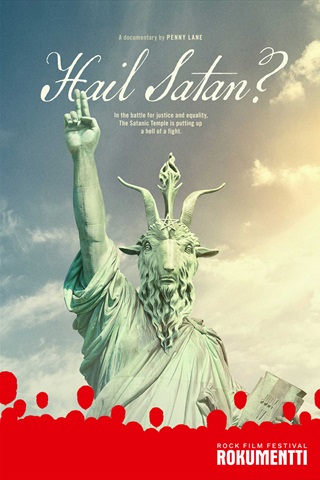 Sympathy for the Devil

If there is one thing that makes the Christian conservatives in the US froth at the mouth with rage, it is of course religious freedom – especially if the believers in question are buddies with Beelzebub. Penny Lane’s documentary chronicles the rise of The Satanic Temple, founded in 2013, and their mission to separate Church and State.

The organization’s ideas are very similar to Church of Satan, which was founded by Anton LaVey in the 1960s. However, The Satanic Temple is more focused on political lobbying (and trolling) than LaVey was. For example, their to-do list includes putting a Baphomet statue next to the religious Ten Commandments monument in front of a government building.

Hail Satan? reveals that the “Satanic Panic” which started in the 1970s is still alive and kicking, although the worst overreactions seem to be history - at least in Finland. The best and safest way to experience this American religious mayhem is by sitting in a dark cinema. Satan himself invites you to see the most hilarious documentary of the year!